Member of the Month: Martha Nibbelin 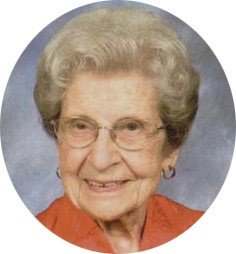 We have chosen Martha Nibbelin as our Member of the Month, because she turned 105 on Monday, June 22nd.

Martha Elizabeth Crawford Nibbelin was born in Milford, IL, a small farming community near the Indiana border, on June 22, 1910. She began life on a farm that today is owned by fifth-generation Crawfords. William Taft was president, and that year saw the founding of the Boy Scouts and Campfire Girls. Many years later, Martha’s husband, Milton Solomon, was a Boy Scout leader in Peoria.

When Martha was 16, her family traveled to Peoria to visit friends. On that day she met Milton, a University of Illinois student four years her senior. They married at the Crawford farm in 1928. After their marriage the couple attended First Baptist Church, where Milton’s family was very active. She joined the church in 1935.

During World War II, when gasoline was in short supply, Martha and Milton rode bicycles several blocks to attend choir practice. Martha played in the bell choir, sang in the chancel choir and used her musical gifts to accompany many children’s choirs and other musical groups.

In 1969, Milton Solomon died of cancer. Not long after Milton’s death, Martha flew to Europe to visit son Jim, a Caterpillar employee living in Switzerland. This was a great adventure, as she had never flown before. Altogether she made six trips to Europe. On one of the early tours, she met a friend who remains a pen pal to this day.

In 1971 Martha married Ed Nibbelin, who worked for Cat. Both were active members of First Baptist until his death in 1991.  Martha has three children, five grandchildren and ten great-grandchildren. Until recently, she was an avid reader and kept a personal diary.

We celebrate Martha’s life and dedication to her church.